Working to improve the Clinch, Holston, and Powell rivers in Virginia.

UTRR presented 2022 awards at the fall membership meeting October 13.
Local Group Award:
Sustain Abingdon coordinates community events that inspire people toward a greener lifestyle. Earth Day Celebration, America Recycles Day, and more. Our director collaborates with this group and assists with the events which draw an incredible number of people.

Soil & Water Conservation Districts:
The Tazewell Soil and Water Conservation District partners with the Roundtable on grants, projects, events, education, and outreach. The district's Mike Horne completed agriculture best management practices through a grant the Roundtable manages with a significant improvement in water quality. The district's Elizabeth Bennett organized a new event for the same grant just mentioned. The event, called Creek Critter Camp, focused on stream monitoring and critters that live in and near the water. This first time event was a huge success and we plan to partner with Elizabeth to host the camp again. The Roundtable partnered with the district on a recycling day collecting 700 tires.

The Clinch Valley Soil and Water Conservation District accomplished many goals this year, including planning and hosting a successful regional Envirothon competition. The district invited our director to be a part of the event and she agreed to write the test for the solid waste and recycling section.
The district also implemented a pet waste program and uses the Roundtable's pet waste brochure as part of the program. The district also agreed to help our director plan our first Fix-It Fair with director Siobhan Nishida and education coordinator Hannah Rexrode assisting. The event went really well with seven vendors who repaired all sorts of items for citizens. Two of the vendors work for the district, Jader Wise, and Brandon Blevins, who went above and beyond what was expected of them by taking the items needing repair home with them. The district also helps with the stream monitoring work led by the Clinch Water Watch. We do not have the capacity to help with the monitoring and are grateful for the district's assistance.


Outstanding Agency:
Corey Kanuckel of the Partners Program for U.S. Fish and Wildlife Service in Abingdon received this award. Corey provides so much assistance for Roundtable grant projects. He helps prepare grant applications, and then when funded, he plans the work for all stream restoration, stream bank stabilization and riparian buffer planting projects and guides our contractors as they implement these projects together. Corey also takes responsibility for permits, surveys, plans, and construction. We are very grateful for Corey's partnership.


Outstanding Educator:
Our director approached Janet Lester many years ago about the idea of having a Conservation Camp for Washington County Schools. Janet agreed and was instrumental in making sure the schools participated in the event each year. After her retirement, Janet continues to work on environmental education. Most recently, she organized a mini conservation camp for kids' day at the Washington County fair. Janet asked out director to recruit the speakers. The event turned out really well reaching hundreds of students and parents.

Outstanding Citizen:
Taysha DeVaughn was responsible for securing funds for our Adopt-A-Stream program as we launched this endeavor. She served as our Clinch River Valley Initiative VISTA for a year and accomplished many goals for CRVI and assisted the Roundtable in many ways.

Outstanding Regional Collaborator: A new category this year
Southwest Virginia Regional Recycling & Solid Waste Working Group receives the first award in this category that was created because of the group's accomplishments. Our director, in her work as executive director for Keep Southwest Virginia Beautiful, initially led the meetings of this group that was formed to address recycling challenges after losing plastics and paper markets. The group began informally and later decided to form a working group, write bylaws, and elect officers. The group's networking through monthly meetings has made a difference and some recycling has resumed in the region as a result.


Outstanding Businesses:
The Spring House in Abingdon hosted our Three Rivers Art Auction this fall, allowing us to utilize the space at no charge. Two of the businesses at the Spring House, Tumbling Creek Cider Co. and Wolf Hills Coffee, are also recognized for their contributions to the auction. Additionally, Tumbling Creek Cider hosted the Roundtable's Three Cheers for Three Rivers fundraiser at their cider barn this year and last year. These fundraising events were successful.

Welcome to our watershed 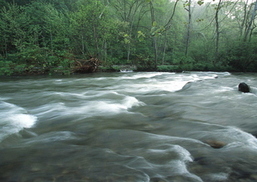 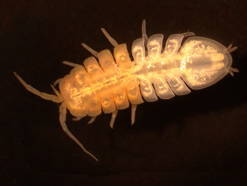 At last count, our watershed had 48 imperiled and vulnerable fish and mussel species. This includes 21 federally endangered or threatened species! The Roundtable has been active in efforts to improve the numbers of individuals of threatened and endangered species in our region. Most recently, following a localized project undertaken by the Roundtable, the Lee County Isopod (pictured at left), at the time in danger of extinction, rebounded in greater numbers. (Image: Shane Hanlon, US Fish and Wildlife)